skip to main | skip to sidebar

Key Points
Dislocation of the kneecap is painful and results in lameness Evaluation of limb alignment may be recommended, especially in large breed dogs to assess the need to correct this; failure to address this can result in increased failure rates Concurrent cruciate ligament injury may be present in dogs that have a dislocating kneecap, therefore this may also need to be addressed Prognosis generally is very good - the higher the grade of the patellar luxation, the greater the failure rate unless more corrective surgeries are done
Introduction
The patella (commonly known as the kneecap) normally rides in a groove at the bottom of the femur at the level of the knee joint in a groove called the trochlear groove; Fig 1 and 2 show a front view of the knee joint; Fig 1 demonstrates the patella in the groove, where as Fig 2 demonstrates the knee cap dislocated out out of the groove (P=patella; F=femoropatellar ligaments which hold the patella in the groove; PL=patellar ligament; G=trochlear groove that the patella rides in). Fig 3 demonstrates a skyline view of the trochlear groove and the patella - you are looking down the thigh or femur bone toward the knee joint; take note of the deep groove that is found in a normal animal. Patellar luxation is caused by congenital abnormality usually at the level of the hip joint and results in abnormal forces on the kneecap, which cause it to eventually ride outside of the groove. The groove becomes very shallow and the attachment of the ligament of the patella may be malpositioned on the tibia bone. If the patellar luxation occurs in immature animals, the tibia and femur bones become twisted. 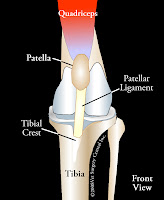 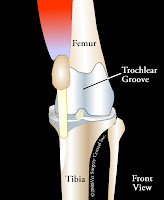 Clinical signs
Lameness
Intermittent skipping gait
Pain
Stiffness of the hind limb
Some pets show only a single sign, whereas others show many signs of the condition
Failure to treat the condition could lead progressive debilitating arthritis of the joint
Surgery
If the groove that the patella rides in is shallow or misshapen, it is surgically deepened; we usually use an advanced technique to perform this called the block osteotomy. The illustration right demonstrates elevation of the cartilage/bone plate. I now use a modified procedure in which the cartialge/bone plate is left attached to the soft tissues (periosteum) at the top of the groove, thus minimizing the risk that the cartilage/bone plate will become displaced in the joint.
Additional bone is removed from the raw bone bed and the cartilage/bone plate is replaced creating a deep groove for the patella to ride in. The benefit of the block osteotomy is that it uniformly deepens the groove from top to bottom and preserves the cartilage that the patella rides on. 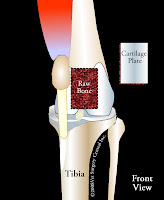 If the attachment of the patellar ligament to the tibia, called the tibial crest, is in the wrong position, it is repositioned. This is done by creating a cut in the tibial crest (see illustrations below) and reattaching the bone in a position so that the patella is realigned within the trochlear groove. Pins are used to fasten the bone in place; the pins usually do not need to be removed unless they migrate out of position or a bubble of fluid (seroma) develops over the end of the pin. 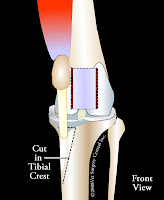 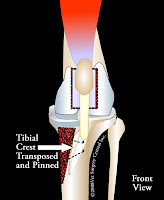 The soft tissues along the side of the patella usually are stretched and are tightened to provide additional support to keep the patella in the trochlear groove. The femur bone may be twisted in some dogs which worsens the condition of the luxating patella. I find that dogs that have a greater than 14 degree bowing (varus) of the thigh bone should have this surgically corrected. Special alignment x-rays are usually taken in large breed dogs to check for this problem. A support bandage is usually not used after surgery so that rehabilitation therapy can be started soon after surgery.

There is an inherent risk of anesthetic death with any procedure requiring anesthesia, however, this is very small Infection of the surgical site, although not common, can occur Pin migration
Seroma formation over the pins If exercise is not minimized for 8 weeks after the surgery, breakdown of the repair may occur, thus requiring a second surgery

If you are concerned about the health of your pet you should contact your veterinary surgeon at all times.

My thanks to Dr. Daniel A. Degner for allowing me to use his material, original can be viewed at the Vet Surgery Central website.

Posted by Papillon Health at 12:40

Papillon Health
A blog dedicated to raising awareness of health issues in the Papillon.